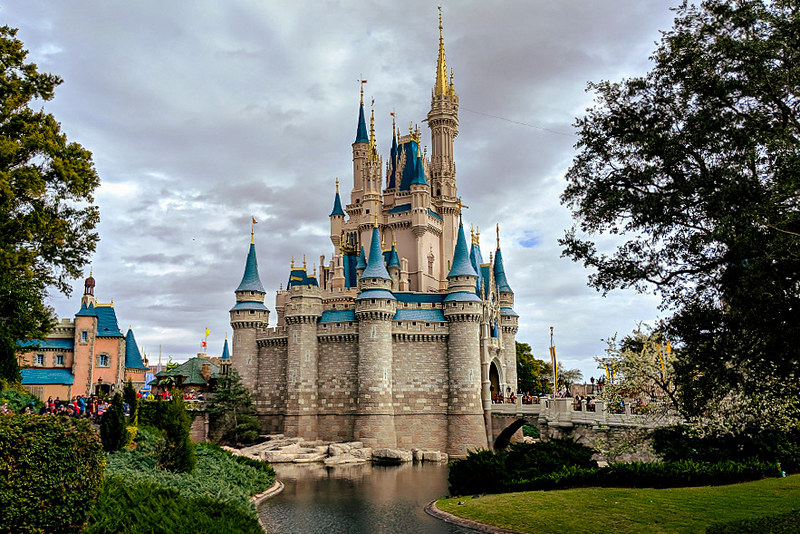 It contains six distinct lands, which spread out from the ‘center’ of the park in a Hub and Spoke pattern, with the Cinderella’s castle serving as the icon at the center of the park.

The six lands are: Main Street, USA, which serves as the main entrance throughway into the rest of the park, leads from the Main Street Rail Station at the entrance of the park into the Hub. This area contains some Character Meet and Greets, Restaurants, and Shops. This area is reminiscent of a turn of the century American Main Street (said to be modelled after Walt Disney’s hometown of Marceline, Missouri).

The next land, moving counter clockwise, is Adventureland. The first thing many will think of in reference to Adventureland is jungle, however, there are more to this land than that. Adventureland mixes jungle, tropical islands and deserts all into one very pleasing package. This area contains dining, shopping and several attractions, including two of the parks most popular, Pirates of the Caribbean and Jungle Cruise. One other popular draw in Adventureland, is one of the most popular Disney treats on the planet, Dole Whip, which can be found at Aloha Isle.

Following Adventureland you’ll enter into the wild west, Frontierland. You can access Frontierland from either Adventureland or Liberty Square, but not directly from the Hub. This area is made up of ‘dirt roads, boardwalks and wood buildings. Frontierland contains shopping, popular dining, such as Pecos Bill Tall Tale, as well as lots of great attractions, including two more fan favorites, Splash Mountain and Big Thunder Mountain.

Moving on from Frontierland, you’ll get to one of the smallest lands at the Magic Kingdom, Liberty Square, home to several restaurants, shops and attractions. Liberty Square is themed after colonial America, and includes a replica of the Liberty Bell (which was cast from the very same mold used for the actual Liberty Bell in Philadelphia, PA). The land is also home to a Christmas store open 365 days a year and the fabled, Haunted Mansion.

Following Liberty Square is arguably the most popular land at the Magic Kingdom, and the one most thought of when someone thinks of the Magic Kingdom, Fantasyland. This area is themed after a medieval-faire style. Home to both classics, like it’s a small world, and new favourites, such as Be Our Guest Restaurant and Seven Dwarfs Mine Train, alike.

Last but not least is Tomorrowland; a land themed after the future (as imagined in the late 60’s). Tomorrowland is heavy on fan favourite attractions, such as Space Mountain, the Tomorrowland Transit Authority PeopleMover and Buzz Lightyear’s Space Ranger Spin. This area is also home to some great shops, quick service restaurants, and intergalactic dance parties.